MiraMichelle is the founder of the Sacred Female Rising Institute, The Cleanse Site Project and author of the upcoming book, ‘Sacred-ize Your Life – The Ancient Art of Ceremony meets the Contemporary Age’. Mira’s love for humanity and planet Earth have brought her to a profound place of advocacy for female-kind. She feels that for humanity to truly establish peace it is necessary to restore and bolster the innate worth and core values of the Divine Feminine.

In its most basic form the Divine Feminine is the life giving force of creation. Establishing a life balance between Feminine and Masculine values and perspectives holds a great power to reshape and heal our world.

A journey is simply a journey – we are all on one! However, a journey gets more interesting the more conscious it becomes. I turned a corner one day and the realization was – you are on a sacred journey and so now pay attention. Wait! Who is that speaking?

What started me on this spiritual journey? What I can say is this…. my first profound mystical experience was at the age of 9yrs. It was rather odd and it took me 10 years to begin to understand what truly happened there. When I did – the realization had an instant effect on my psyche – we are not alone and we have so much love and support around us!’
One day they just come… our Ancestors, our spirit guides, higher selves and what I like to call – the Goddess/God voice …. and they guide you to and through direct spiritual experience. This is what many shaman’s call ‘direct revelation’ and it truly is because the life and ceremonial experience opens up and this is when the real power comes – when all physical teaches leave and one meets the vastness.

How did it start for me? Meditation and stillness were my first step into the vastness because I had a need. It may sound a bit obscure however, it was mathematics that led me to meditation. I was 19 years old and to pass my college math exams I read in a magazine article that meditation could help. I felt desperate and as guidance does work whether or not we are paying attention along came an answer and an invitation to a small meditation group in a personal residence. I went to check it out and it changed my life!

What happened then…I spent five years in meditation training with the light head ascended master Yogananda Paramahansa and studied and practiced the ancient Goddess traditions after I attended a sacred circle where crones were prevalent. I was 19 and felt somewhat intimidated by the power and presence that I felt there. One of these magical women handed me the book, ‘The Chalice and the Blade’ and wished me all the best on my journey. Years later this experience would come back to remind and reward me as well as thousands of women who entered my doors and circles.
This experience was also one of the reasons why I eventually founded the SFR Institute.  To rebuild the original female solidarity and assist women in rediscovering their spiritual natures. Moon groups were instrumental in this and therefore,  I was greatly moved to make moon groups a staple in my works.  The first moon group I facilitated was in Los Angeles, Ca. in 1995.

Back to the winding journey … as I arrived in Los Angeles to pursue my acting career and found the even more massive benefit of meditation. This is where I truly developed a consistent and dedicated practice and met my soul at the Self Realization Fellowship – specifically the Lake Shrine by Pacific Mother Ocean. Another life saver, as living in L.A without a daily practice I do not recommend if you are sensitive or an empath or if you simply wish to remain sensitive. It was at this time that I was guided to begin my first Goddess Group. There were 5 of us and we studied what we thought at first was the myth of the Mother Goddess until we found out it was real! What an eye opener that was in both intellectual and spiritual presence.

These experiences led me to author the Sacred Female Rising Her-Story Booklet. This Her-Story Booklet has been academically supported by my mentor, Gerhard Bott, Panorama Television Chief Editor & Founder (ARD/NDR) and author of the renowned book, ‘Die Erfindung der Götter’, which was an imperative support in my studies of the Matrifocal societies of the Paleolithic.

But, let’s continue on the meandering journey of life and spirit…. in L.A. I also engaged in deep inner child clearing work with a traditional psychotherapist for 2 years 2 times a week. What!? I was determined to find something out and that something was me. Or so I thought at the time. I will also mention that as a human pursuing Method Acting – that inner child stuff was and is the fuel of authenticity and great performances. At the end of this 5/6 year story… I began to be liberated from the deep insecurities of my conditioning and psychological patterns… one NO at a time! Talking about deep dives – it was an abyss of a journey that cured my ladened consciousness and taught me what being in the moment truly feels like.

And then one day I came to a cross roads, of sorts, and almost died. My spirit was directing me one way and my stubborn mind and wounded need to be seen another. This was an intense experience and interesting story that I will endeavor to share in one of my upcoming blogs.  But, before I almost died I discovered during those 5+ years that I had an intrinsic connection to ceremony. I just knew what to do and how to do it. Often times I would write up a ceremony and find it later in a book or direct experience.

This is why one of my callings is to inspire and awaken in contemporary humans their original connection to Nature through Sacred Ceremony. Also to enlighten and educate women about the prehistoric role of the female gatherer/provider who was the initial creator of ceremony and who birthed forth the first medicine person – who was a woman.

‘The missing feminine perspective is direly affecting our world. We must begin to ask ourselves how we can bring about balance to these ailing male patriarchal systems that we presently live within. As a mother of two sons I feel deeply motivated to help bring about wise and heartfelt solutions to our current dilemmas.” mm

All of this prepared me to be ready for the next giant leap of evolution – to open my Native American ancestral line of wisdom. I was guided to Chief Sonne Reyna (Whirlwind Eagle Wolf), a Native American Elder and 8 yr. peace Chief of The Sun Dance Society who took me under his eagle wings and showed me what I had effectively forgotten. Intense real cultural ceremonies that reawakened ancestral knowledge that lived deep inside of me. Which in turn energetically opened my English/Irish Celtic ancestral lineages and my African Ancestral lineages – all have played important roles in the empowerment of my healing and ceremonial abilities.

These awakenings lit a fire of purpose within me and since then I have been guided to facilitate hundreds of lunar gatherings and ceremonies in many cities and countries. It is interesting for me to actually say that I hold 25 years of experience facilitating groups and ceremonies for women and mixed groups. It has been a profound honor and distinct privilege to walk this way on planet earth with all of you! Ahey! 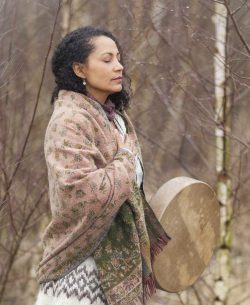 According to Mira Michelle a collective female rising is essential today in order to restore peace in our modern world. Too much yang energy creates too much aggressiveness (either passive or active), unnecessary competitive environments and war! Not psychologically healthy alpha males in one place can be a destructive force and we women have had enough of this particular brand of male leadership, partnership and fatherhood!! Not to mention the disrespect for life and humanity!

‘The missing feminine perspective is direly affecting our world. We must begin to ask ourselves how we can bring about balance to these ailing male patriarchal systems that we presently live within. As a mother of two sons I feel deeply motivated to help bring about wise and heartfelt solutions to our current dilemmas.” mm

SFR/MiraMichelle supports two main not for profit ongoing projects. ‘The Cleanse Site Project’ is an ‘in house’ ceremonial based work that cleanses land sites of past traumas. ‘The Codes for a Healthy Earth’ & 7 Days of Rest, created by Dr. Shelley Ostroff and Yan Golding is a whole system healing and governance movement.

The past 10 years I have facilitated an annual Medicine Woman Training. The training was held in the mystical lands of Harz, Germany where up to 21 women, from all walks of life and nations, come together to realize female solidarity and investigate the path of the medicine woman from ancient to modern times. The attending women learn shamanic & quantum tools, commune deeply with nature and witness each other becoming empowered through self-realization and self-healing. Between the years of 2013 to 2016 there were 5 trainings. I then took a one year break and began again in 2018 to 2020 where there were 3 regular trainings and an advanced training. What an incredible experience – for us all! I am now developing an online training that will start in March 2022.

‘A spirit midwife’ to the new consciousness presently being born on our planet – is what I have dedicated myself and my work towards. The symbiotic relationship with human kind and the earth coupled with science and the path of the shaman gives me inspiration and knowledge. It is an honor and a privilege to do this work and share it with the world.

“As a woman moves towards true emancipation her path will, at some point, lead her to the old wise woman of all the medicines.”

Mira was born to an English/Irish mother and an African/Indigenous American father, she was raised in distinctly different cultures and this reality has given her a great ability to understand, appreciate and to connect with different cultures. “My mixed ethnicity truly taught me to be a more independent being and authentic human. When you feel that you do not belong to any tribe fully – it leaves a gap – for me that gap could only be filled by a higher truth… which for me, lead to a deeper freedom!”

MiraMichelle has been a professional actress and model in California and Europe. As well as an executive English coach in Hamburg, Germany where she also ran her own English Language Business. She studied communications and psychology at Sacramento State University and finished her bachelor degree at St. Mary’s College in California.

Hope that you have enjoyed the read. It is a snippet of experiences wound together from my heart to yours.
Thank you for reading!